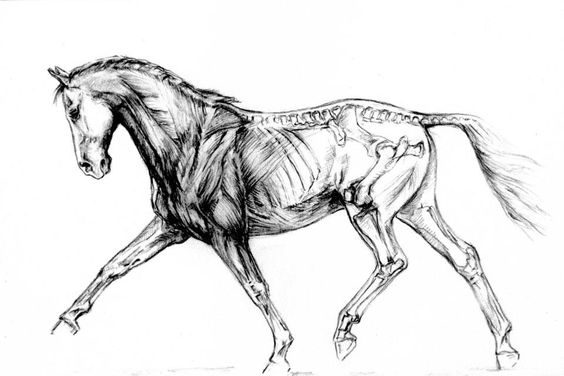 Following my attendance to an insightful and thought-provoking lecture and demonstration by Tom Beech (The Osteopathic Vet), Ricky Gache (Farrier) and Mandy Miller (Olympus Saddlery Ltd) at Lomond Classical Equestrian Centre… this weeks muscle focus will orientate around the Iliopsoas muscle group of the horse. This blog post will also touch on “The Psoas Theory” which is a train of thought that injury to the Iliopsoas muscle group is far more common than we think, and injury can be responsible for the primary cause of secondary pain and poor performance seen in modern day equines.

The Iliopsoas muscle group is comprised of the Psoas Major and the Iliacus muscle. 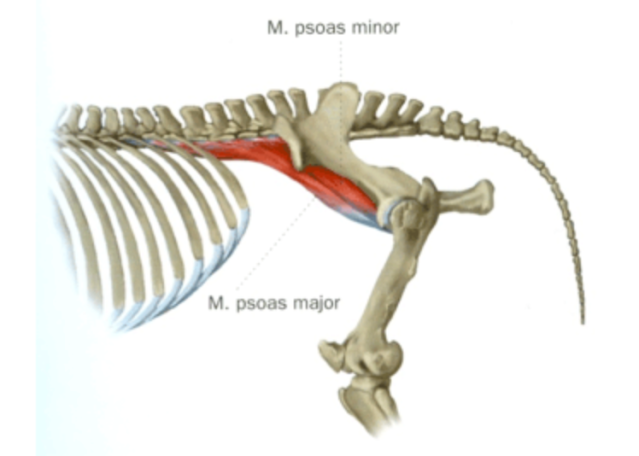 Innervation (same as that of Psoas Major):

Both the Iliacus and Psoas Major that make up the Iliopsoas have the same muscular function.

The Iliopsoas muscle group connects the trunk to the hindquarters, enabling hindlimb muscle engagement whilst maintaining correct posture. As is easily determined by noting the function of the Iliopsoas, correct and healthy function is required for efficient hindlimb protraction.

The Iliopsoas is particularly vulnerable to strain due to its anatomical positioning and function. Therefore, the likelihood of a force being applied beyond the muscles capabilities is increased.

Whilst the injury may have occurred in the Iliopsoas muscle group, a direct negative effect on the function of the Psoas Minor muscle may occur.

Injury can occur unilaterally or bilaterally.

In a case where there is an injury to a muscle, it would be expected to see lameness… locomotive signs of discomfort and pain. However, the Iliopsoas muscle group can be injured without causing apparent lameness. Instead, more subtle signs may be evident. 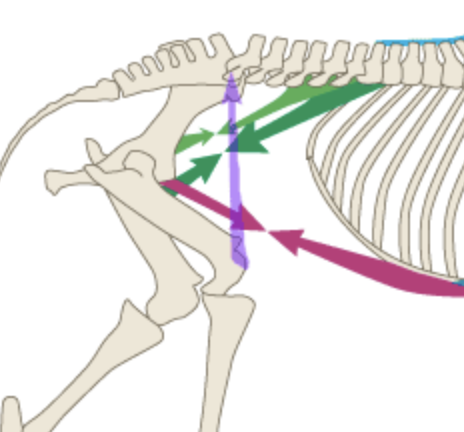 Acute clinical signs can then develop into chronic problems.

The Link between Iliopsoas Pain and Back Sensitivity

Sensitivity located over the lumbar portion of the spine and behind the saddle can potentially be associated with Iliopsoas discomfort.

The Link between Iliopsoas Discomfort, Diet and Kidneys

The Link between Hormones and Iliopsoas Sensitivity

The ovaries of a horse sit just behind the last rib. When a mare is in season, she may be particularly sensitive over this area of skin. The Iliopsoas muscle is also located in this area, and may become hypertonic (harder/increased tone) or contain excess fluid (oedema) when in season.

The nerves that determine whether a horse develops ovaries or testicles when they are an embryo are the same. With this in mind, the process of gelding a horse involves the cutting of a neuromuscular bundle. This can mean that branches of nerves that come from the same area of nerves that innervate the ovaries in a mare can be damaged. Hence, a gelding can also become sensitive in the same area that a mare would during her seasons.

When muscles do not function correctly, additional strain on associated tendons, ligaments and joints will undoubtedly occur.

Prehabilitation – the art of prevention

In order to prevent injury and consequent dysfunction of the Iliopsoas muscle, methods of prehabilitation can be implemented:

As the Iliopsoas muscle group is a very deep muscle, it cannot be directly palpated. Therefore, massage directly on to the muscle is not a feasible option. Instead, the muscle has to be released actively by the horse themselves. An example of a method used to release this muscle is the Masterson Method, whereby the practitioner learns to engage the horse in a series of exercises that can release tension deep inside the body. Additionally, massage of the surrounding superficial muscles can have a secondary effect of Iliopsoas relaxation.

WHY TO TREAT THE ILIOPSOAS?

The simplistic concept of releasing a muscle in order to promote physical and mental wellbeing for the animal is commonly accepted. However, there is a belief that by releasing muscles that hold tension we are hampering the capacity of the tendons to store adequate elastic potential energy for efficient locomotion. This belief is derived from observing and treating the animal from a locomotive perspective, rather than a muscular one. This is overviewed in the diagram below.

Horse Wellness Blog – What Lies Beneath the Rider’s Seat: The Horse’s Psoas Muscle!

3 thoughts on “The Equine Iliopsoas Muscle”